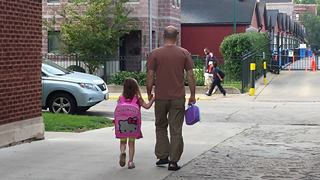 This morning my older son’s fiancee posted a picture of him walking her five-year-old daughter to her first day of kindergarten at a Chicago public school. (While the little girl is not officially his daughter, he considers her to be so and my husband and I think of ourselves as her grandparents).  I smiled, I cried, I yearned to be with them all, I worried about her in a Chicago school, considering the mess the system is currently in. And I was taken right back to the time I was walking my son, and his brother and sister after him, to their first day of “big kid” school. Where the hell did the time go? The time they wrote their letter E’s backward? When they drew the sky as a line of blue scribble-scrabble on the top of the paper? Or when, in my daughter’s case, she collected Beanie Babies? The other day she—who, with luck, we will be taking to college next year—decided to empty her closet of her little puppies and kitties and lambie-pies and various other unnaturally-colored species along with her soft animal puppets and stuffed hippos, lions and pandas. They were packed in the closet, and her considerable wardrobe was strewn around the room on every available surface or still living in shopping bags. Of course, I had been hectoring her for a while to clean the mess up. But when I saw those little creatures being carted away in clear garbage bags (clear so she could still see them—or maybe so they could see out?), I was sad, even though they were only taken upstairs. She is still not ready to get rid of them, but she no longer needs them nearby. One little girl starting kindergarten, another— who I still think of as my little girl— preparing to leave home. Too much poignancy for one week.