A Tree Dies in Brooklyn 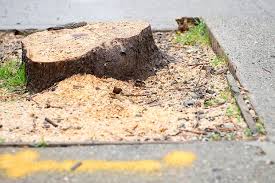 This morning men in hard hats and lime-green rain suits arrived in bright orange trucks. One truck carried a cherry picker, the other a wood chipper. They blocked off our street. The tree outside our house had died (been killed, we think), and the City had sent a team to take it down. A man went up in the cherry picker, started up his buzz saw, and cut down the limbs one by one. When he was done, another man took down the trunk. They fed the remains into the chipper. They swept up the twigs and sawdust and drove off.
A year ago, during a tremendously hard downpour, the sewer line on our block sprung a leak near our house. The basement and ground floor of our home, and those of our immediate neighbors on both sides of the street, were flooded. Instead of water going down the drain in the well by our downstairs entrance, water was bubbling up and flowing over the threshold. It was quite a mess for a while. Not to mention the fight with the insurance company. But the damage inside was eventually repaired. The aggravation subsided. And the City repaired the sewer line—which entailed digging up a good portion of the street. And—this is where the murder comes in—hurting the roots of the tree in the process. The City giveth and the City taketh away.
We didn’t realize what had happened right away. We saw that the tree had lost all its leaves, but assumed it had absorbed some shock. Fall came, and all the trees were leafless. But then it was spring. The other trees came back to life, and it was clear our tree wasn’t going to. I contacted 311. And a few weeks later the men arrived. The final official e-mail reads like a death notice: Your service request is closed.
Now there is a stump in front of the house. A reminder of the life that once was. Maybe if my daughter wasn’t going off to college and my son moving to Europe I wouldn’t see so much symbolism in the loss of the tree. Maybe if I didn’t feel so old. Or hadn’t lost a limb myself.
But that is not honoring the tree. It was beautiful, it was alive. It died too soon. RIP tree. I am ashamed to say I don’t even know what kind it was, just that it wasn’t very old for a tree, probably the youngest and slimmest on the block, although it had been there before we moved in 20 years ago.
Maybe there had been another tree before it that had met a similar fate. As I write this, men from Con Ed, having waited for the tree removal to finish, are digging around in the street in front of the house. Maybe the tangle of wires and pipes and repeated repairs will doom any tree planted there. But I hope not. I want a new tree, something green and growing. And if I can get one, I promise this time I will know its name.