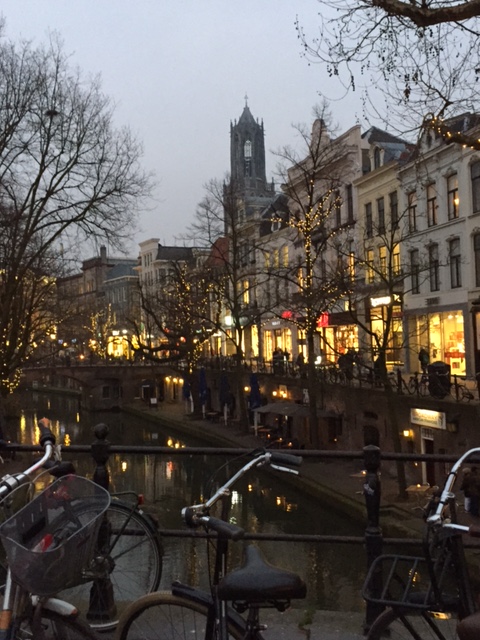 We are back in Utrecht, a city my husband and I have grown to love after several visits. Our younger son now lives in a nearby town and we are visiting for his 30th birthday. Today we went on the Dom Under tour. The Dom is the 14th Century church tower, the tallest in the country, that is the symbol of Utrecht.  It survived the tornado of 1674 that destroyed the nave. Under the Dom is evidence of earlier churches and the Roman fortification that was built nearly 2,000 years ago. We knew this history (you can’t avoid being bombarded with Dom information in Utrecht), but after seeing the somewhat cheesy film reenactment of the storm, it struck me for the first time that the destruction of the church in a sudden, violent act was like the felling of the Twin Towers. Both traumatized their cities. Here in Utrecht, the rubble of the nave was not even cleared away for 150 years.

And, of course, it put me in mind of the second trauma we are now experiencing—the election of Trump. In fact, the young woman who sold us our tour tickets asked us about the mood in America. As if we needed proof, last Saturday’s marches around the globe made it clear this horrible event is affecting people worldwide. And, of course, the wonderful video from Dutch TV and the action taken by the government concerning accessibility to abortion demonstrate that The Netherlands, in particular, is very aware of the consequences of having someone with neo-Fascist, anti-scientific tendencies ascend to the presidency by questionable means. Let’s just say rising ocean levels are of concern to a nation that is one-third to-one half below sea level and whose name means the low countries.

We have been impressed over and over by the humane social policies of this nation. We would love our son and his wife to move back to the United States, but what kind of argument can we make for that now? The bad news for The Netherlands is that Geert Wilders’s rightist party is gaining in popularity.

A Dutch friend assures us Wilders won’t be able to form a majority government. Let’s hope so. We thought it couldn’t happen here –– didn’t we?