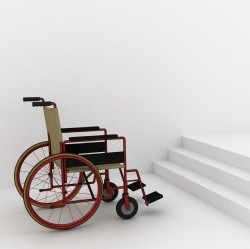 A few years ago I attended an event at Lincoln Center. At one point I went to use the bathroom, and chose the stall designated for the handicapped. I was greatly amused to see that the flush was a foot-activated pedal. Not a major incident, but I thought about this morning as I read about Greg Abbott, the conservative Texas attorney general, now running for governor of the state. Abbott uses a wheelchair and fights against the Americans with Disabilities Act. He represents one side of the argument made by minority groups: we want to be seen as fully competent citizens, not be defined by our disability or skin color or sexual orientation. Yet Abbott, like Justice Roberts in his recent Supreme Court decision striking down the Voting Rights Act, or Justice Thomas, who rejects affirmative action, fails to take into account that we live in a nation molded by centuries of prejudice against—and ignorance about— people with disabilities, people of color, people who are gay, lesbian and transgendered. I am no psychologist, but I see denial in the conservative stance. And maybe even, for Abbott and Thomas, a degree of self-hatred. For those of us with mental or physical disabilities, recognition that we are not society’s detritus is very recent. Children with mental or physical differences are no longer segregated in schools to the extent they were even 30 years ago. That every person should have the right to access to buildings in which to work, get an education, see a movie, buy a pair of pants, became law only 23 years ago. This federal imposition of rules on private business seems to be what bothers Abbott. But if we are a country that values simple fairness—a far cry from the ideal of equality—then laws that apply to everyone, as history has shown us, are the only way to get us there. The expression “leveling the playing field” may be a cliché, but, for people with impaired mobility, if the field isn’t flat and accessible by a ramp, we are out of the game.