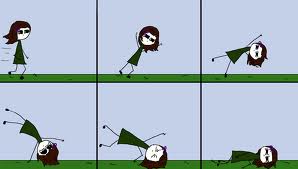 A teacher at my daughter’s high school once asked her what she did to relax— and she answered, “Babysit.” She loves to babysit. She loves kids. She’s really good with them, too. She’s the one who can make the shy kids comfortable, get them to talk. The one who got a disdainful eight-year-old boy in her summer camp group to lead a dance performance. And she’s the one who was asked by the parents of an eight-year-old girl to come over specifically to teach their daughter how to do a cartwheel. Nothing wrong with that. Except the reason this child was so desperate to learn how to do a cartwheel was because finessing it would allow her to sit with the “cool” kids at lunch at her private school. The cool third-graders. It would be funny if it wasn’t so sad. Somehow cartwheels had become the new status symbol.

My own daughter once had been the target of mean girls. Not when she was eight, but when she was in middle school. The leader of a clique decided my girl wasn’t good enough to be friends with her and her drones—girls she had been friends with the year before. No incident preceded this. It came out of nowhere. One minute they were hugging her hello, the next minute they wouldn’t speak to her. Knowing the head meanie and her mother, I wasn’t surprised at the cruel behavior. Thankfully, it lasted only a brief time and never rose to the level of outright bullying. Thankfully, my daughter had many other friends and a strong sense of self (and loving parents) to help her through it.

So my heart and my daughter’s went out to this sweet little girl trying to be accepted by the “in” crowd in elementary school.  The cartwheel sessions are coming along nicely. But there is clearly something very wrong going on when eight-year-olds are coming up with ways to exclude other kids on the flimsiest of pretenses. And the solution is not more gymnastics training.

(Thanks, Rae, for the great visual!)